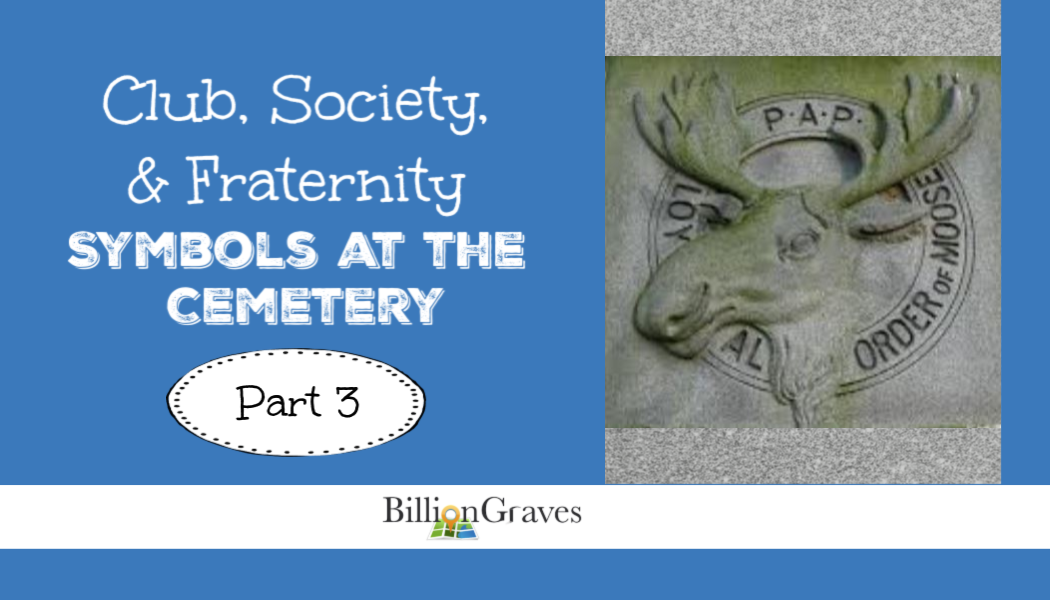 Club, society, and fraternity gravestone symbols can give you clues about your ancestor’s lives. And you never know when the slightest clue might help you add another generation to your family tree!

This is the third post of a three-part blog series to explore the following club, society, and fraternity gravestone symbols at the cemetery.

This 3rd post of the series will specifically focus on:

It will also explore gravestones that have symbols from more than one club, society, or fraternity gravestone symbol.

Club, Society and Fraternity Gravestone Symbol #11: Loyal Order of the Moose and Women of the Moose

In a cemetery, you expect to see flowers, crosses, angels, and lambs on gravestones. But you may be startled to come across a moose head! When you do, you may be quite sure that the deceased belonged to the Loyal Order of the Moose.

In 1888, the Loyal Order of the Moose was founded as a fraternal and service organization. Well, at least on the surface anyway. In reality, it was a social drinking club and the meeting lodges were called Watering Places.

Later, the focus shifted to more charitable causes. The order currently has more than a million members scattered throughout the United States, Canada, Great Britain, and Bermuda.

The Loyal Order of the Moose Beneficiaries:

Nearly 90% of the Moose Lodges have supporting auxiliaries called Women of the Moose, for female relatives of the fraternity. The gravestone below marks the final resting place of a member of the Women of the Moose with the letters F, H, and C on the three points of a triangle representing Faith, Hope, and Charity.

You have probably encountered members of the Salvation Army dressed as bell-ringing Santas as you exit a store during the Christmas holidays. The coins you may have dropped in their bucket went to help the disadvantaged and downtrodden.

The Salvation Army is also well known for its thrift stores and rehabilitation centers for drugs and alcohol.

The Salvation Army was founded in 1865 in England by William and Catherine Booth.

It’s no mistake that the organization has the word Army in it. It is first a Christian church and second, a social service organization. The leader’s title is General. Ministers or officers are known as Officers and church members are called Soldiers. The Salvation Army also employs thousands of lay workers called Employees. Member volunteers serve in Community Ministeries. The concept is that the members are fighting a Christian battle against evil.

The logo of the Salvation Army is a shield, another symbol of a people at war. During the Boar War, Salvation Army founder William Booth sent officers to South Africa to provide refreshments, first aid, and religious worship for the British troops.

These officers wore silver shield badges with the words Salvation Army emblazoned on them to identify themselves. After the war, one of the officers expressed concern that the silver badges might reflect light, thereby revealing the location of the troops to their enemies. Consequently, the silver background was replaced with red enamel.

Today, the emblem is a red shield with white lettering. It represents the protective shield that The Salvation Army provides to people in need of help physically, financially, emotionally, or spiritually.

Symbols of the Salvation Army

If you see a gravestone with the Salvation Army emblem on it, like the one pictured above, you will now know what that person valued as a member of this organization.

If you are walking through a cemetery and see Islamic symbols that seem oddly out of the place for their location, you may be standing next to the gravestone of a member of the Shriner fraternity.

All Shriners are Masons, but not all Masons are Shriners. Or put more simply, Shriners are Masons who just want to have fun. (You can learn more about the Masons – members of the FreeMasonry fraternity – in part 1 of this series by clicking HERE.)

In 1872, Freemasons Walter Fleming, M.D., and William Florence, an actor, were evidently not having enough fun at their Masonic meetings, so they decided to form their own fraternity.

Fleming and Florence needed a name for their new order, so they took the letters from A MASON, scrambled them up, and used each as the first letter in the title of their new organization: The Imperial Council of the Ancient Arabic Order of the Nobles of the Mystic Shrine. (Say that three times real fast!) It was quite a mouthful, so the group went by Shriners for short.

The Shriners kept the Masonic principles of brotherly love, truth, and relief for those in need. But they dumped the rituals and long meetings. Instead, they came up with ways for grown men to play like children.

While on a vacation in France, Florence attended a party given by an Arabian diplomat. It was such fun that this goofy pair of founders adopted many Islamic symbols for the Shriners – but they deliberately exaggerated them. (Which understandably is annoying to followers of that faith.)

Each summer the Shriners plopped fezzes on their heads, squeezed into tiny cars, and drove in crazy circles at parades to the delight of parents and children alike.

In 1906, the group founded the Shrine Circus which is still in existence today.

But after 50 years of playing, the Shriners decided to also put their fraternal brotherhood to use by helping those in need. They voted to charge $2 annual dues and used the money to build the first Shriners Hospital for Crippled Children, now known as Shriners Hospitals for Children.

The hospitals are free of charge for children in need. Their focus is on helping youngsters with burns or spinal cord injuries.

What started out as a lot of silly fun, grew into a lot of serious donations for children. The Shriners spend nearly $25 million per year on spinal cord rehabilitation and about $1,600,000 per day on their hospitals.

So if you see some Islam symbols on a gravestone, the person buried there may have been Arabic – or they may have been a fun-loving generous Shriner.

Club, Society and Fraternity Gravestone Symbol #14: Woodmen of the World

The first time I saw a Woodmen of the World gravestone at a cemetery, I did a doubletake. It looked so real that it blended in with the surrounding trees, appearing at first to be part of nature.

Why would anyone want a headstone that looked like a realistic tree stump? Well, it is a symbol for the Woodmen of the World, the fraternity-turned-insurance-company.

In 1882, founder Joseph Cullen Root heard a church sermon about pioneer men who were clearing the forests to provide for their families. It inspired him so much that he wanted to help provide for others too. So Root started a fraternity/insurance company designed for the common man so no one would have to die without life insurance.

Rustic treestones were already popular when the Woodmen of the World was founded in 1890, but the fraternity made them even more popular. The company motto states that “no Woodmen shall rest in an unmarked grave.”

Root established the traditions for the Woodmen of the World based on other club, society, and fraternity symbols and rituals. This was natural to him because was a joiner! Joseph had previously belonged to the Freemasons, The Independent Order of the Odd Fellows, The Knights of Pythias, The Knights Templar, The Iowa Legion of Honor, and The Ancient Order of Workmen and Mechanics.

Original Requirements to Join Woodmen of the World

All of these requirements have now been rescinded, with the exception of religious freedom. But if your ancestor has a Woodmen of the World gravestone that was placed in the mid to late 1800’s, you now have some clues about their life.

The gravestone pictured above, shaped like a stack of logs, was a symbol of the Woodmen of the World. Each log represented one of the deceased’s children – so 5 children in this case. Now that is a GREAT clue for genealogists!

So how did fraternities and insurance companies come to be intertwined in the first place? A little history lesson will help explain.

In 19th century America, only the very wealthy bought life insurance. Men were usually the bread-winners of the family. Women were not allowed to take policies for their husbands. If a man took out a policy for himself, creditors came after the money soon after his death.

This meant that the death of a husband and father would leave his wife and children destitute. In the mid- to late 1800s many families were hit hard with this reality since more than 620,000 men died during the Civil War alone. Epidemics and fatal injuries left many more in jeopardy.

In addition, accepting charity was seen as a sign of weakness. So families were often hit with the double stigma of shame on top of grief.

To combat these problems, working-class men joined clubs, societies, and fraternities that supported families after a member’s death. The compensation wasn’t seen as a humiliating hand-out because the man had “earned” it by proving himself to be hard-working and of good character during his membership in a lodge.

And what about all the wild fun that often went with membership in a club, society, or fraternity? Well, that kept the man coming back for more – and paying his insurance premiums for decades.

Wow! How’s that for a big gravestone!? This log cabin tomb is eight feet high, eight feet long, and four feet deep. Henry Clontz Severs (1842 – 1915) is buried beneath this log cabin monument, carved from a 15-ton piece of granite.

The gravestones in this section below have a combination of symbols from various groups, usually indicating that an individual joined more than one club, society, or fraternity.

This gravestone from Texas features a Masonic star with the lodge number 53 at the top. The Knights of Pythias symbols of an open book and sword are seen on the left. And the Order of Railway Conductors Perpetual Friendship handshake is on the right.

The deceased man buried beneath the gravestone above, located in the Oak Dale Cemetery in Marysville, Ohio, was a member of both the Woodmen of the World and the Knights of Pythias. Though his wife is not identified by name, their “babes” are listed as “Hattie & Nettie, Ray & Jay.”

This gravestone above is a subtle blend of fraternal symbols. The shield and crossed weapons at the back represent the Salvation Army. The three-link chain with the letters FLT (Friendship, Love, and Truth) is an Odd Fellows symbol. And the knight’s helmet with additional weaponry are symbols of the Knights of Pythias.

These gravestone flag holders show that the departed was a duel fraternity member. The marker on the right with the knight’s helmet and crossed weapons shows that he belonged to the Knights of Pythias (right) and the one on the left with the three-linked chain shows that he was a member of the Order of the Odd Fellows.

This final gravestone image has fraternity symbols of a square and compass from the Freemasons and a 3-link chain from the Odd Fellows. Famous Freemasons such as Winston Churchill, Franklin Roosevelt, William McKinley, Red Skelton, and Chief Justice Earl Warren also belonged to the Independent Order of Odd Fellows.

To learn about other gravestone symbols check out these BillionGraves posts:

We wish you great discoveries at the cemetery!

P.S. Documenting a cemetery with your group can be an amazing experience! If you would like to be a part of the movement to photograph gravestones with the BillionGraves app to provide GPS-linked data, send us an email at Volunteer@BillionGraves.com and we’ll be happy to help you get started!